See what features, functionality and fixes were shipped in Version 98 (December 2022).
M
Written by Martin Clark
Updated over a week ago

Please note: At ProspectSoft, we use Release Rings to systematically deliver new features in a way that minimises risk. This means that updates aren't rolled out to every user on the day they're shipped. Instead, they're gradually delivered to a small percentage of customers each day within specified Release Rings. Of course, if customers report issues with an update, we'll pause the rollout while we investigate. So, if you can't see the newest updates yet, don't worry - you'll receive them in the next few weeks.

We’ve added a button in the further options menu (three dots in top-right hand corner) on all Company and Contact Reports that allows you to quickly and easily plot their locations on Google Maps. The pins can be colour-coded by either Company Type or RFM category and you can select this from the drop-down in the bottom-left of the screen.

This new feature will initially plot just the first 25 addresses in the report. We've limited this due to the relatively slow response times from the Google API when requesting long/lat geolocations. However, in the next update to this feature, we'll be adding location caching and you'll then be able to map more locations if needed. 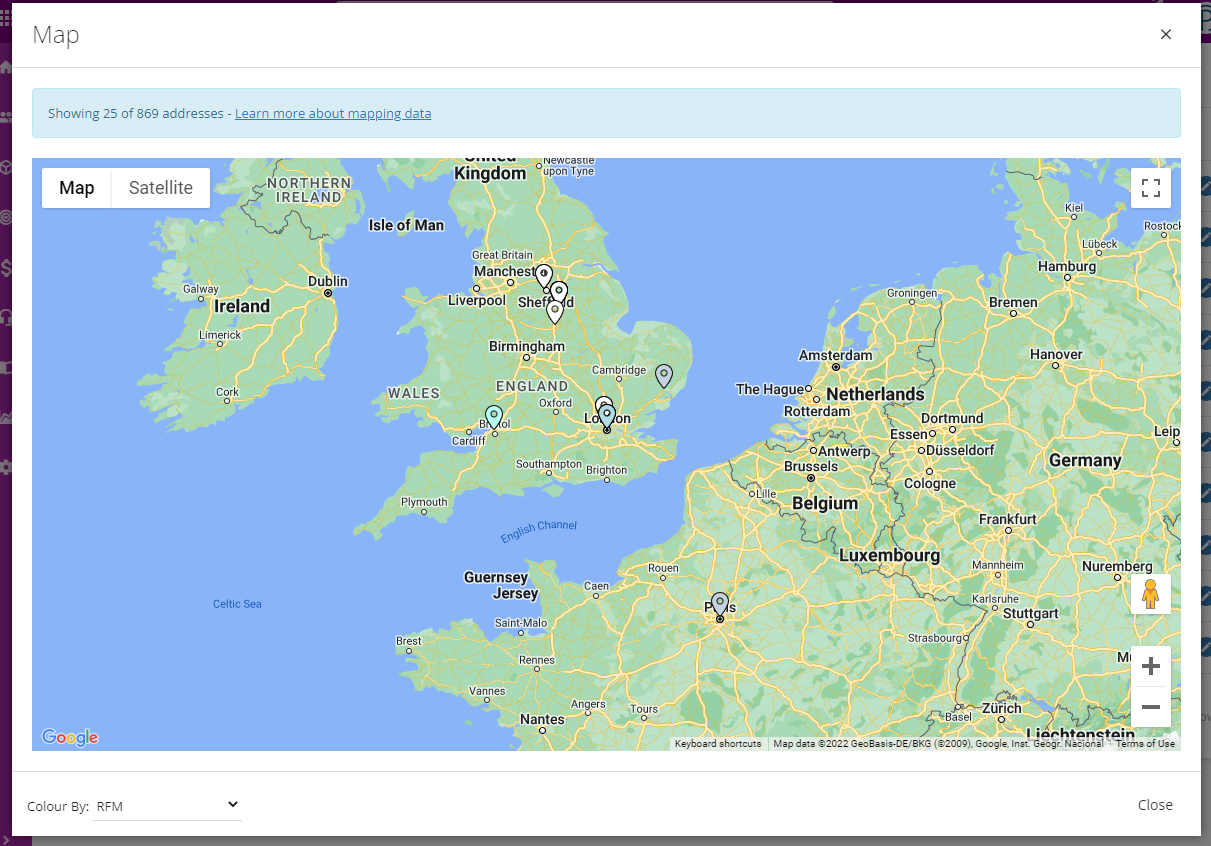 Note: while this new feature allows you to very quickly plot locations on Google Maps, it's also possible to export other data and plot more specific information. You can learn more about exporting and plotting data here.

We’ve added support for Access Dimensions BOM (Bill Of Materials) calculations, allowing stock levels to reflect the number of items that could potentially be built from components. The Components that make up a BOM are listed on a new Assembly tab on a Product Item, and the stock level information can now include the Quantity Available (how many are already made, in stock and available to sell), the Total Buildable (how many more can be built from the current stock level of components and subcomponents), and then the Total Available (being the total you could sell if you include all the existing available stock and all the buildable stock).

In this release, this functionality is only available for Access Dimensions, but the data structures and calculations could be used in future to implement BOM calculations for other ERP/Inventory Management/Accounting Systems (subject to limitations in that system's feature or API). If you're interested in seeing this feature implemented for your ERP or Inventory Management solution, please register your interest/vote via the Prospect Ideas Portal.

This feature has been regularly requested by users over the years, and so while it's a small feature update, we're sure lots of customers will be pleased to see that we've finally done it! You can still set Guttometer levels on Opportunities entirely irrelevant of the status (which we think is on balance the best plan - after all, you could be very close to the final stages of an Opportunity but still think it won't close!). But if you prefer you can now set a Guttometer level for each Opportunity status in your pipelines. Then, when setting the status on an Opportunity, it'll automatically update the Opportunity Guttometer to whatever level has been defined for that status.

We've updated our new Enquiry feature with a new import capability. The best way to create and register new enquiries is undoubtedly via the Web Forms feature (which is very exciting - give it a try if you haven't already done so!). But if you have a bunch of Enquiries that you need to enter manually, you can of course already do that one-by-one; or now you can import multiple Enquiries from a spreadsheet using the "Import Data" link on the bottom-left of the form. 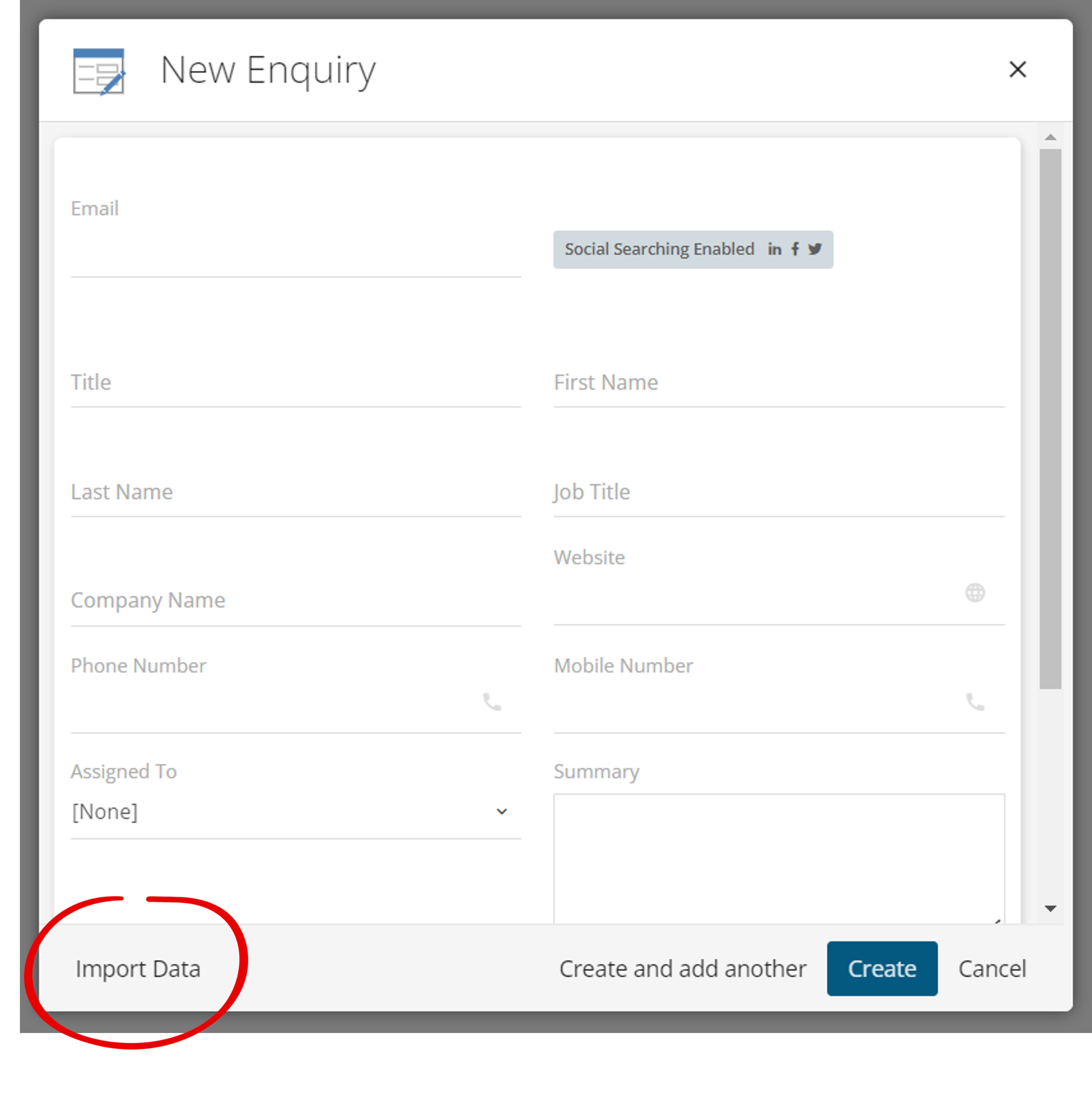 We're currently testing a new importer mode that imports Opportunities into the CRM from an Excel file. At the moment this feature is only available internally to Prospect CRM consultants, so if you're interested in importing Opportunities right now then please contact us via the in-app chat. Once this new import has been tested against real world scenarios by our team, it'll be added to the UI to make it available to users.