See what features, functionality and fixes were shipped in Version 92 (August 2022).
M
Written by Martin Clark
Updated over a week ago

You can now restore deleted records more easily, all within the CRM user interface rather than having to use the Admin Portal. This CRM feature includes

"cascade restore" functionality that helps you to restore the entire tree that was deleted. So, when you restore a given record (e.g. a Contact), the CRM will automatically restore all related records that were deleted on that same day (i.e. any Documents, Quotes, Opportunities etc. that were manually or automatically cascade-deleted when the Contact deletion took place).

Several improvements have been made to B2B and B2C handling in this release.

Firstly, a system option has been added that can be used to disable the automatic classification of customer accounts (Ledgers) imported from the integrated Inventory, ERP or Accounting system. This also disables the automatic creation of Company and Contact records based on these Ledgers. This feature then allows users to manually set the B2B or B2C flags on a record-by-record basis. This feature is useful when it isn't possible to reliably identify B2B/B2C records using any of the various rules available to you. In which case, this option allows users to intervene and set the relevant flag so that the appropriate CRM records are created as a result.

We've also added the ability to bulk convert Companies to B2C records, and bulk convert B2C Contacts to B2B. These new features will make it easier to convert any customer records that have already been created with the incorrect type.

The combination of these new features, alongside the various rules that can already be defined, should ensure that all CRM records can ultimately be correctly classified as B2B and B2C. This improves reporting and makes it possible for you to analyse and service each customer in the right way. 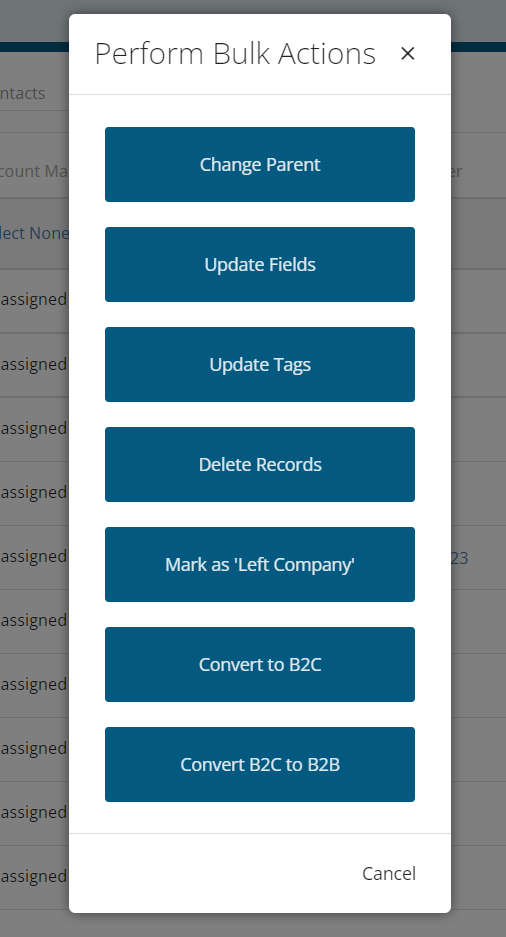